Giggle of the Week 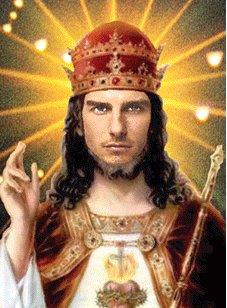 I suppose the hilarity of Tom Cruise's increasingly unhinged state is a matter of how funny you find bipolar disorder, but here is one blogger's genius photo annotation of the transcript of Dr. Tom's recent slapdown of Matt Lauer on the Today Show. Just try not to giggle.
Posted by Terri H. at 2:05 PM No comments: 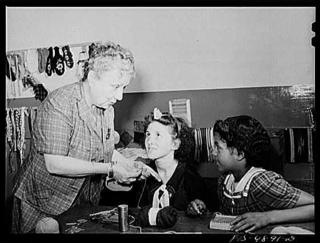 Since I haven't had a lot of knitting output of my own to brag about lately, I've decided to start using some of the images I've collected to encourage me to post more--how cool is this Blogger Images thing? No more uploading and going back to edit...thanks, blogger dudes.
Posted by Terri H. at 12:22 PM No comments:

Knitting on Six Feet Under 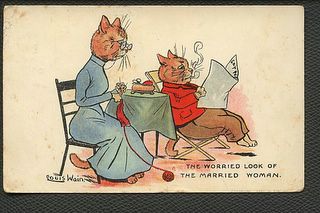 Ruth Fisher was knitting on the most recent episode of Six Feet Under. According to a recent discussion on Knitter's Review the show has filmed scenes at an LYS in Burbank, so it looks like knitting might play a role in future episodes. As usual, I was busy obsessing over whether Frances Conroy was really knitting (odd camera angles and strategically placed props made it difficult to tell), but what was more interesting was the way Ruth's knitting was used as a symbol of the distance in her relationship with George. He asked her not to knit, saying she is "miles away" when she picks up the needles. Ruth replied "I like to knit. I deserve to knit." Tell it, sister. It will be interesting to see how the knitting angle plays out; I'm hoping they avoid the obvious lobotomy on George with an Addi Turbo. One of the most appealing aspects of SFU is the warts and all presentation of believable characters in surreal situations. Ruth has been getting a lot of hate on the internet discussion boards for her treatment of loony George (would you have patience with a husband who hides food in his pockets?); letting her knit might be a way to center her character. Then again, it might be a way for her to slaughter everyone in the last episode of the series.
Posted by Terri H. at 10:53 AM No comments: 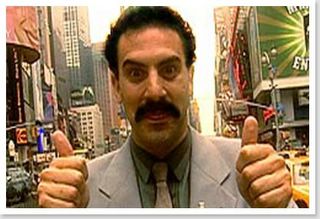 Cool celebrity sighting yesterday afternoon: Sacha Baron Cohen in Borat drag emerging from the subway station at the Columbus Circle Mall...I mean Time Warner Center. I spotted the cameras trying to be unobtrusive a block or so away, so I knew something was up. Borat was coming up the stairs carrying two large leather suitcases and looking bewildered, but if he was trying to pull a punk'd it obviously wasn't working because people were going bananas with the cellphone cameras and excited calls to friends (I, by the way, don't have a cell phone camera so I cribbed this off Google images). When I came back out of the mall Sacha seemed to have given up; he was with a couple of P.A. types, communicating on a walkie talkie looking somewhat deflated but oddly handsome.
Posted by Terri H. at 9:12 PM No comments:

I knew something was odd when I turned on the radio to clean the kitchen on Friday evening and "Stacey's Mom" was on. "Cool song," I thought, "how interesting that CBS-FM is playing it." But then when the next song started...I didn't know it. And I knew something was not only odd, but terribly wrong. WCBS-FM, NYC's oldies station, had changed, just like that, to something called "Jack." Jack is a robot station, called "Fred" or "Morty" or lord knows what else on other interchangeable stations in other interchangeable cities. There is no weather, no traffic report, no corny jokes, no DJ--just...Jack. The playlist is somebody else's I-Pod shuffle--Fountains of Wayne to Springsteen to Steely Dan to Green Day to on and on. I've got nothing against the first three artists, and in fact I have nothing against Green Day, but I wouldn't know a Green Day song if it stood up in my soup. And the thing about turning on CBS-FM at any time is that I knew I would know the song. Even if I hated the song, I would know it, and I could sing every single annoying word while I scrubbed the kitchen floor. The D.J.'s were the annoying relatives you avoid at weddings, but I knew them, too. I officially have no demographic. Where else am I going to hear Tony Orlando and Dawn when I'm sick of pretending I'm more a public radio kind of adult?

Change may be good, but Jack is evil.
Posted by Terri H. at 5:46 PM No comments: 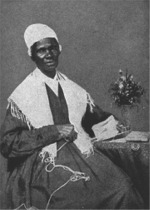